The UG Agreement is finally signed. It has been sent to the ABM’s and should be distributed shortly.

I would like to make you aware of an issue while working in stations. Homeland Security is coming around and taking pictures and seeing if anyone is asking them questions or if there is an open gate. There unfortunately have been a couple cases where a gate has been left open. If you see someone you think should not be there, call your supervisor or security.

NGrid along with several other properties are doing their annual dependent life insurance and medical verification audits. It is a little early this year. You may have to provide documentation.

The lockout for NGrid Steelworker unions on the Boston property is still going on for over two months now. Marcy Reed, who is their President, has put statements out to the public on what they are being offered along with posting what their salaries are along with overtime. This is in response to the Steelworkers going to the public. The company is standing firm on their offer. This affects 1,200 union members. They have sent management replacement workers. If the Steelworkers reach out for our support, we will assist in any way we can.

Regional Control – working on the schedules for 12 hour shifts. We are trying to get it done. They want to include Transmission in it as well.

Safety – there are a lot of eyes on us right now. Issues with working without rubber gloves and PPE. We are seeing what I call excessive discipline. We had one where employee had no rubber gloves and received three weeks off along with a demotion. Another employee had no PPE or tailboard and was given four weeks off. We are fighting it. They are watching. We had an incident during a storm where a customer took a picture of a crew working thanking them for their work and when you looked at picture they were not using PPE. If we work safe, we will be fine; wear everything, we will be fine. We are the only union of NGrid to negotiate safety. Remember to follow the rules.

Gas Agreement is on the table with the Company.

The town is looking to take over Huntley by eminent domain. They have water issues where Huntley supplies raw water to three plants. If that does not continue, it could mean the plants will be closing down causing more job loss. We still have a contract with the plant, so not sure how that would work. We will see where it goes.

I also wanted to touch on change. We are going thru agreements and have to look at things differently. Who would think that a lot of households would no longer have a land line, smart meters are coming, we have drones delivering packages to your house and cars with no driver in it. I bring these examples up because change is coming. The more we push on smaller things it will be harder to stay in the game. It is very difficult to go to the table in relations to safety if we do not use the proper safety equipment; it is difficult to defend. Remember to work safely. 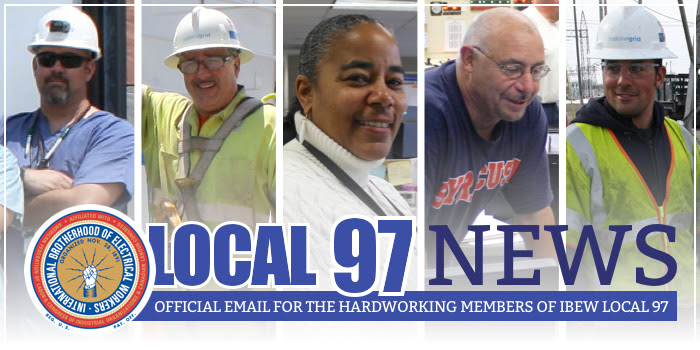